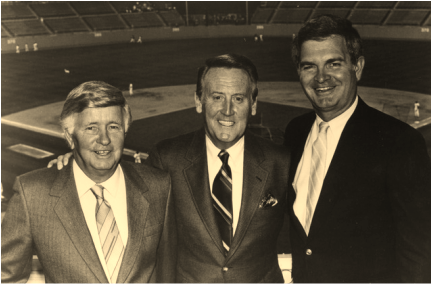 Jerry Doggett, left, Ross Porter, right, and some redheaded guy in the middle
Much of High Fives, Pennant Drives, and Fernandomania: A Fan's History of the Los Angeles Dodgers' Glory Years (1977-1981) is told through radio and TV broadcasts, preserving in time an aural history of the team as relayed by announcers Vin Scully, Jerry Doggett and Ross Porter.

Over a period of four years, from ages 11 to 15, I recorded a total of 15 hours of broadcasts over 10 audio tapes.  I kept these tapes literally in a shoe box for about 30 years.  These recordings capturing the final few years of the Dodgers' last great dynasty form the basis for much of my book.
The recordings include all the "greatest hits" of that era -- their World Series win against the Yankees in '81; Jerry Reuss's '80 no-hitter; Monday's epic homer in the '81 NLCS; Fernandomania, etc. -- but some of my favorites include smaller, quirkier moments that have gotten buried in time, or eclipsed by more newsworthy events.  My book unearths these little gems so that you feel more immersed in the team's 162-game (or in the case of 1980, 163-game) seasons.