If you remember the Garvey-Sutton scuffle, Monday's homer, and straw hats on ushers,
you may want to keep reading... 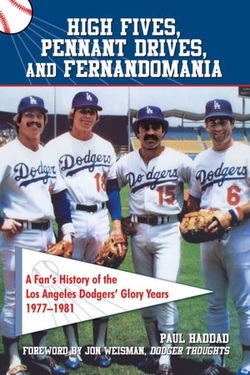 For a team that was so popular, the 1970s / early '80s Dodgers get surprisingly short shrift in print.

There have been volumes of great literature written about the Dodgers, but most of it either covers the Brooklyn Boys of Summer, the Koufax era, or simply folds the Garvey-Lopes-Cey-Russell era into larger narratives about the franchise, like Steve Delsohn's fine True Blue: The Dramatic History of the Los Angeles Dodgers.

High Fives doesn't just fill the dearth of books on many fans' favorite Dodger era.  It uproots it from being an entertaining little sideshow to the center stage, where it rightfully belongs.  And it's told from a fan's (as opposed to a sportswriter's) perspective, so readers will find it very relatable.

In recounting this era, I have a secret weapon in my arsenal -- hours of archival audio from my personal collection.  Readers will not just experience (or re-experience) the highs and lows of the 1977-1981 Dodgers, but, through transcripts, be able to "hear" what those games sounded like as broadcast by the Dodgers' play-by-play team of Vin Scully, Jerry Doggett and Ross Porter.

In addition to these audio time time capsules, High Fives is chock full of minutiae guaranteed to teleport you right back into the frame of mind of hearing a game from that era.  Other features in the book include:

* Numerous charts, sidebars and lists of Dodger lore
* A list of the obligatory Union 76 Auto Script plugs after Dodger home runs
* 5-for-5: 5 games that defined each year's squad
* Fernando Watches: Timeouts to recap each of Fernando's starts in the '81 season
* "True-Blue Ribbon" Calls, honoring the best radio call each season
* Rare transcripts of KABC radio's "Ross Porter's Viewpoint" segments
* Johnny Carson's monologue jokes about baseball during the '81 players' strike
* "The Big Three": In-depth detail about the team's improbable, season-ending sweep of the '80 Astros, forcing a one
-day playoff  (Many historians cite this series as the most exciting L.A. ever played in a regular season)
* Full-page photos of the Dodgers' most iconic players
* Detailed analysis of almost every player to put on a uniform from this era, from Von Joshua to Vic Davalillo
* A special homage to PA announcer John Ramsey
* Blow-by-blow, "real-time" descriptions of the '81 World Series as experienced off the TV and radio broadcasts.
Includes "Howard Homerisms," a ranking, using hot air balloons, of NY'er Howard Cossell's most "hot air" comments
* Enough pot-shots at Jack Clark and Reggie Jackson to make any Dodger fan feel better about themselves!